A Review of "Strange New World: How Thinkers and Activists Redefined Identity and Sparked the Sexual Revolution" by Carl Trueman

"[T]he last vestiges of a social imaginary shaped by Christianity are rapidly vanishing, and many of us are even now living as strangers in a strange new world."1 For anyone whose head has not been firmly planted in the blissful sands of ignorance, this observation by Carl Trueman in Strange New World sadly rings true. With the modern West now awash in post-Christian thinking, many are finding themselves in a sea of strange dogmas fueled by the rise of what Trueman calls expressive individualism. 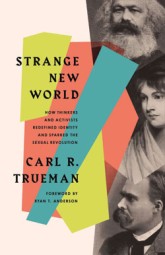 Sign-in to read the full article.

Not yet a Salvo subscriber?
Subscribe for as low as $15.99

graduated summa cum laude from California State University, Fresno, with a BS in molecular biology and a minor in cognitive psychology. As an undergraduate, she conducted research in immunology, microbiology, behavioral and cognitive psychology, scanning tunneling microscopy and genetics - having published research in the Journal of Experimental Psychology, and projects in scanning tunneling microscopy. Having recently completed an M.Ed. from University of Cincinnati and a Certificate in Apologetics with the Talbot School of Theology at Biola University, Emily is currently an instructional designer/content developer for Moody Bible Institute and teaches organic chemistry and physics. As a former Darwinian evolutionist, Emily now regards the intelligent design arguments more credible than those proffered by Darwinists for explaining the origin of life.

Atheist or Not, You Already Have More Faith Than You Realize

Also in This Issue

The Hideous Autopsy of the Playboy Life

Whale of a Tale

Or Why Bears Still Swim with Paws

A MAGAZINE OF SOCIETY, SEX, & SCIENCE